Food First is a “people’s think tank” dedicated to ending the injustices that cause hunger and helping communities to take back control of their food systems. We advance our mission through three interrelated work areas: research, education and action. These work areas are designed to promote informed citizen engagement with the institutions and policies that control our food and to integrate local, national and global efforts. Our work both informs and amplifies the voices of social movements fighting for food justice and food sovereignty. 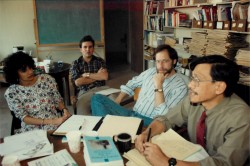 The goal of Food First’s research work is to generate information and analysis for food justice and food sovereignty—locally and globally. We also carry out Participatory Action Research with community organizations to help them generate their own information and analyses. The combination of our applied and participatory research produces real-time information and insights. Our research brings the perspective of community-based struggles to broader development debates and provides the raw materials to support education that can bring about change. The core of Food First’s long-time work, our research and analysis is disseminated through a variety of research publications—including backgrounders, policy briefs, development reports and books—which help popular audiences to understand the complex dynamics of our global food system. The ability to convey complex ideas in accessible language has been a hallmark of Food First’s publications since the organization was founded in 1975. We believe that collective knowledge sharing and production is vital to building effective movements for social change. Our researchers have also been widely published in peer-reviewed journals and other academic publications, which lends credibility to our work and helps us influence policy debates. 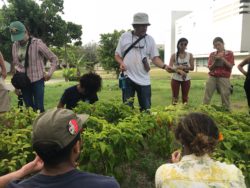 Food First Fellow Miguel Altieri working with students and farmers on agroecology and resiliency in Puerto Rico in 2018.

Food First publications are widely used in university courses and by community groups and organizers around the world. Food First has published over 60 books, with translations in 22 languages worldwide. In addition, Executive Director M. Jahi Chappell and Food First researchers teach courses and seminars, give talks, lead workshops, and participate in public discussions everywhere from university classrooms and international conferences to farms and community centers. In 2017, Food First organized a series of community events across the country as part of our national book tour for our anthology, Land Justice: Re-Imagining, Land, Food, and the Commons in the United States. These community events brought together farmers, activists, and scholars from frontline communities to discuss the growing call  for land justice — a new kind of agrarian reform that would serve as an important pillar to food justice and sovereignty. In 2018, former Food First Executive Director Eric Holt-Giménez and Food First Fellows Miguel Altieri and Leonor Hurtado partnered with Organizacion Boricuá to host a series of workshops on building agricultural resiliency and food sovereignty through agroecology in Puerto Rico after Hurricane Maria. Combining technical skills and political education, workshops like these are a key part in building international solidarity and food sovereignty in the face of disaster capitalism and US colonialism. 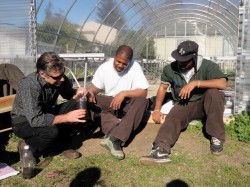 Food First is not just a “think tank.” We generate research and education for action. And we also support community-based projects around the world that are creating real change for real people. Through our Farmer-led Pollinator Restoration project, we worked with peasant farmers in central Mexico to spread knowledge about sustainable agriculture through community radio programs and farmer-to-farmer networks. In West Africa, Food First supports the We are the Solution Campaign, led by small farmers and women to spread agroecological knowledge and advocate for policies that support family farming—not large-scale industrial agriculture. We are also raising funds to help small farmers in war-torn Mali rebuild their local food systems through our Seeds for Gao, Mali campaign. Locally, Food First incubated the Oakland Food Policy Council, an innovative council of farmers, restaurateurs, policymakers and engaged citizens working together to build an equitable and sustainable food system where we live, in Oakland, California. Food First also supported urban farmers and gardeners in the San Francisco East Bay region by incubating the Urban Farmer Field Schools project, which helps build local agroecological knowledge for stronger community-based food systems.