A Guide to Peppers of the Basque Country

While peppers are native to the Americas, they hold a special place in Basque cuisine. The plant, brought from the New World in the 16th century, quickly became essential, replacing black pepper as a key ingredient in the classic basque dish piperade.

Ainhoa Iturbe, a member of EHNE (the Basque Farmers’ Union), was our hostess at her “agroturismo” guesthouse called Aristieta Baserria. According to Ainhoa, there are three types of peppers commonly grown in Basque country:

These are large, green, sweet (not hot) and pointed.  They are not dried because they are too fleshy, and the seeds were not easily available in the farmers’ market of Guernika. I suspect these are used for the “stuffed peppers” offered to us on one occasion on the tour. 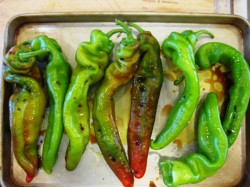 These are used in three major ways: fried green, or used when red in chorizo sausage and Biscaya Sauce (salsa vizcaína).  When fried green they are sweet and Urroz (2010) calls them “one of the crowning delights of Bizkaian cuisine.” They are fried lightly in olive oil until the skin blisters white. Ainhoa cautions to be sure to cut the end so they don’t explode!

When mature, choricero peppers are medium sized, red and not particularly spicy. They are dried and used all year round. They are reconstituted by soaking in hot water briefly and scraping off the skins for the Biscaya sauce or the choricero sausage. They can also be dried, ground and used as a type of paprika. The “espelette” or (piment d’espelette in French) variety of choricero is AOC controlled.[1] Ainhoa gave us seeds from last year’s crop of choricero peppers and this was distributed among the tour participants.

In La Salsa Vizcaina the author José Angel Iturbe, a professional cook and Ainhoa’s godparent, compared 24 recipes for salsa vizcaina published in two time periods, 1845-1896 and 1900-1960. In the latter period, 23 out of 24 recipes called for choricero peppers, though during the earlier period various types of peppers were used for the sauce. In making the bizcaya sauce the peppers should be combined with sweet red onions that should be cooked slowly for 4-5 hours!

When red and dried they can be used to flavor cooking oil, for example when cooking snails, says Basque farmer and Vía Campesina leader Paul Nicholson.

These can be spicy or not and can be used either green or red. When red and dried they can be used to flavor cooking oil, for example when cooking snails, says Basque farmer and Vía Campesina leader Paul Nicholson. When green they can be fried as above or they can be pickled and served as a condiment with dried beans and chorizo or as a pintxo on a skewer with anchovies (as we had in Gernika). I haven’t tried planting the Guindilla yet, but in a jar of pickled peppers I bought there (Ekolo brand), they were uniformly mildly spicy (meaning I could eat a whole one, even though I am fairly sensitive to peppers).  These are stable in spiciness with the stage of maturity, as distinct from the Spanish pepper variety common in Catalu?a, “pimienta de padrón” where about 1 in 10 are spicy. These are fried green and served as a mound with coarse salt as a tapa or pintxo.

I was able to procure guindilla seed from several sources during the tour, including the markets in Guernika and from the seed store (Semillas Antunano) in the Casco Viejo district of Bilbao.

Experience Basque food and farm traditions for yourself! Join Food First on a Food Sovereignty Tour to the Basque Country – Click here for more information.

[1] AOC, translated as “controlled designation of origin,” is the French certification granted to certain French geographical indications for wines, cheeses, butters, and other agricultural products.