Acclaimed NYU professor, author, and public health advocate Marion Nestle joined Food First on the special 40th Anniversary Food Sovereignty delegation to Cuba. Food First was excited to welcome Nestle, whose pivotal works include books Food Politics and What to Eat, which along with her food activism and teaching have established her as an important voice in the global food movement.

The eight-day tour explored permaculture programs and agroecological farming in and around Havana. The group traveled to the stunning countryside of Viñales to see firsthand what happens when national policy prioritizes organic farming. The group met with the Ministry of Agriculture to discuss what plans are in store for the future of food and agriculture in Cuba in light of changing U.S.–Cuba relations.

Nestle has shared her unique insights on the delegation and Cuba’s food system in a series of blog posts. The following is the second of four posts from Nestle’s blog Food Politics.

As noted in an earlier post, I was offline from June 13-20 on a visit to Cuba with a Food First group visiting small organic farms, rural and urban.

This was my third trip to Cuba. I came with other groups in 1990 and 1992 at the beginning of what Cubans refer to as the “Special Period,” the economic disaster caused by the collapse of the Soviet Union, the end of its support for the 1959 Castro revolution, and the U.S. embargo on trade with Cuba.

The embargo also required countries that trade with the U.S. to stop trading with Cuba. For tourists like me, the lingering effects of the embargo are the travel restrictions, the failure of U.S. cell phones to work, and the scarce and slow Internet access. Hence: Offline.

But change is imminent. I heard many Cubans mention December 17, the day of President Obama’s 2014 announcement of resumption of relations with Cuba, as if it ought to be celebrated as a national holiday.

Our group traveled by charter flight from Miami. My first surprise: We were not alone. The Miami airport devotes two entire concourses exclusively to Cuban charter flights. As many as 20 flights every day are packed with people who have families in Cuba, business people, and tourists of one kind or another.

Our group was interested in Cuban agriculture and food systems. This post deals with rural agricultural production. In subsequent posts, I’ll talk about urban farming and what the Cuban food scene looks like.

This, however, does not break the embargo; it is classified as sales, not trade. The Cubans buy agricultural products from us, mostly frozen chicken for people, and soybeans and soybean meal for animal feed.

We did not see much agriculture on this trip. There is plenty of land, but gas, transportation, and tractors are extremely limited. The highway between Havana and Pinar del Rio is well maintained but we saw few cars on it—horse-drawn carts, yes, cars and trucks, no. And lots of land not in production.

The reasons for this go beyond the embargo. We heard repeatedly that Cubans don’t like doing agricultural labor: The population is highly educated, 80 percent urban, the climate is hot and humid, and Cuban culture does not value that kind of work.

Much of Cuban food is imported. How much?  Estimates range from 35 percent to 85 percent depending on whether whoever is doing the estimating is for or against the Cuban revolution. 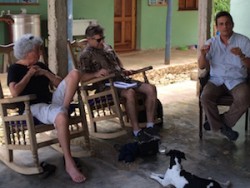 Marion Nestle in conversation with Eric Holt-Giménez and Fernando Funes-Monzote.

An official of the agriculture ministry told us that Cuba is self-sufficient or nearly so in eggs, mangos, sugar, and tobacco. I took this photo of mangos grown on the remarkable farm in Pinar del Rio established as a model for sustainability by Fernando Funes-Monzote.

At present, food is grown in Cuba on large farms owned by the state or held by family-owned cooperatives of one kind or another, or on smaller farms that are owned by private individuals or families. Only 70 percent or so of arable land is in production. The state still has a million hectares to distribute, but has a hard time getting anyone to farm it.

Most production is organic, but not by choice. The embargo makes agricultural inputs unavailable or prohibitively expensive. See, for example, Modern Farmer’s photo-essay on Cuban farming. Rice and potatoes, however, are not organically grown, and neither is most tobacco. We heard from farmers in the exceptionally beautiful Viñales region that tobacco is beginning to be grown organically.

They are proud of their tobacco. It is used for high-quality cigars and is a major cash crop.

The agricultural situation in Cuba, like much else about the country, is full of contradictions.

Read the rest of the series at Food Politics: Part 1 on the availability of U.S. products in Cuba; Part 3 on urban farming; and Part 4 on access to food.