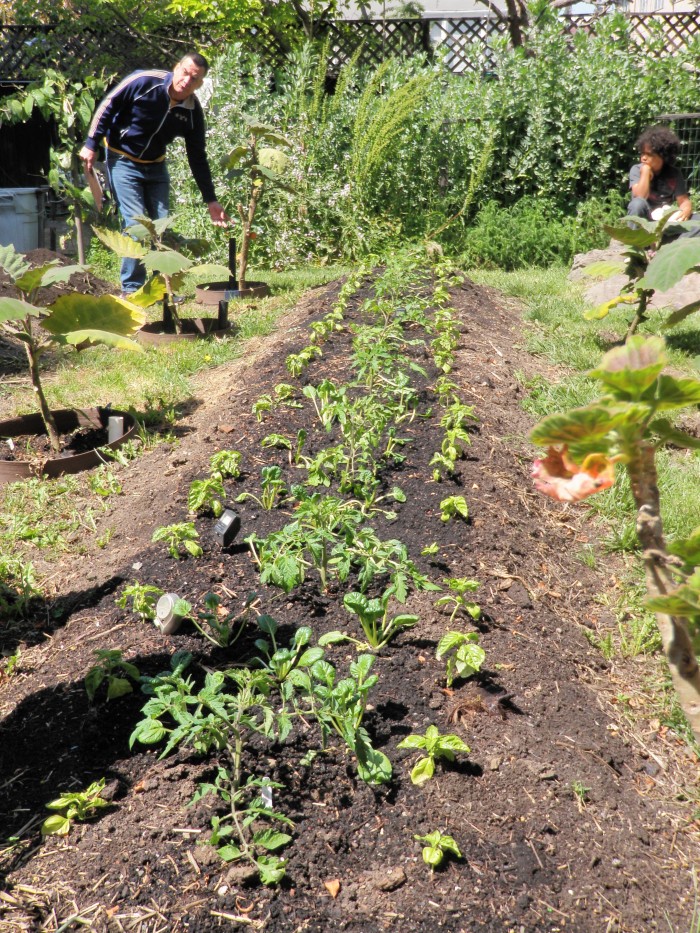 The global food crisis, climate change and the widespread production failures of GMOs have brought agroecology—and farmer-to-farmer networks—into the forefront.

As the nation’s first food think tank, Food First denounced the myth of scarcity and the environmental destruction of the Green Revolution, and warned of the dangers of corporate control over our food nearly forty years ago. We called for ending the injustices that cause hunger. In the face of the growing food, fuel and climate crises, Food First has intensified its work with researchers, farmers, community groups, policy makers and social movements to build a just and sustainable food system. We are democratizing our food system, from the ground up.

In a novel application of the peasant-based peer learning networks from rural Asia, our Urban Farmer Field School project—coordinated by Katie Bradley, a phd student at UC Davis whose position is funded by C-prep—is building agroecological knowledge in the San Francisco Bay Area. Workshops on crop planning, greenhouse management, fruit tree pruning and “fertigation” are helping to address the lack of farmer extension services for urban farmers in the East Bay’s underserved communities. By working closely with these pathbreaking grassroots efforts, Food First is able to draw out important lessons for agroecology, food sovereignty and food justice.

We’re a “think-and-do” tank. Our direct engagement with the grassroots gives us a practical perspective on food system research that both helps to inform the larger food movement and amplifies the voices of the communities and organizations on the front lines of food system transformation. Along with dozens of worker-researchers, we designed a study carried out by the Food Chain Workers Alliance that measures the food security of restaurant workers. Their results are due to be published soon—and you may be surprised at what we found. 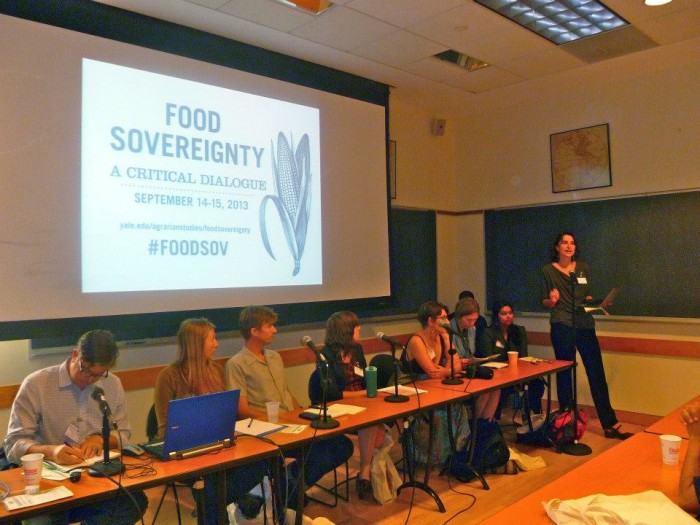 In June of 2013, we joined an invited group of civil society organizations to Vía Campesina’s 20th anniversary conference in Jakarta, Indonesia in which the 2.5 million strong peasant federation declared that building alliances and agroecology (two pillars of our work) are central to food sovereignty. Following up on the Land Grabs Conference we co-organized at Cornell University in 2012, last September, along with the Transnational Institute (TNI), we co-organized the first International Conference on Food Sovereignty at Yale University in which social movements and leading academics debated the future of food sovereignty in agrarian studies—and vice versa. Food First fellows Jun Borras and Annie Shattuck worked countless hours pulling off this remarkable event. At the conference, Food First fellow Zoe Brent presented research on farmland preservation in California; Annie Shattuck chaired a panel on culture, tradition and food sovereignty; fellow Raj Patel spoke in a plenary session; Food First research coordinator Tanya Kerssen presented research on the quinoa boom in Bolivia; and Eric Holt-Giménez spoke in the closing plenary. With such a large presence of Food First scholars, the event underscored Food First’s important role in both social movements and academic inquiry. View videos from the conference at: www.foodfirst. org/publication/food-sovereignty-acritical- dialogue/

In 2013, Food First researchers Eric Holt-Giménez and Tanya Kerssen gave numerous lectures, classes and taught courses for undergraduates, Masters and Doctoral candidates on international development, food systems, agroecology and social movements. Tanya Kerssen’s online course in “Community-Based Food Systems” through Village Earth and accredited by Colorado State University was also adopted by Duke University in September 2013. Our educational work took us to universities in the US, Canada, Italy, the Netherlands and Colombia. Many of these presentations were filmed by Food First fellow Leonor Hurtado (along with over twenty short food justice and community-based video documentaries) and can be found on our Vimeo and YouTube sites. Food First books, briefs and reports have been taken up as part of the curriculum in universities across the US and internationally. The Food First translation team coordinated by Leonor diligently translated many of these into Spanish, Portuguese and French. 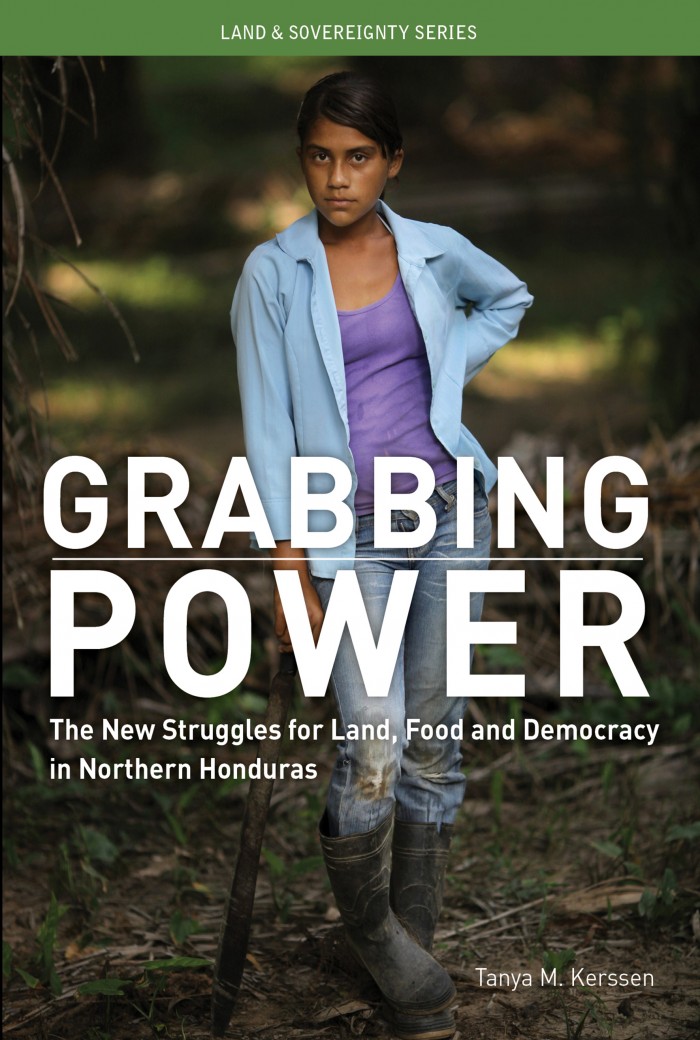 Food First integrates academic and activist worlds in much of our work, particularly our Land and Sovereignty in the Americas collective coordinated by fellow Zoe Brent. In 2013, the collective released four policy briefs exploring community resistance to land grabs, including important case studies on Guatemala, Bolivia and Argentina. In early 2013, Food First published the first book in the Land & Sovereignty Series Grabbing Power: The New Struggles for Land, Food and Democracy in Northern Honduras by Tanya Kerssen, which has already sold over 800 copies. UN Special Rapporteur on the Right to Food Olivier De Schutter called it “required reading for those who wish to understand land grabbing from the point of view of the victims.” We’re currently developing the next book in the series—stay tuned! In our renowned quarterly Backgrounder series, we continued to address timely issues for understanding our increasingly complex global food system.

In 2013, we published the following Backgrounders:

Our e-newsletters—People Putting Food First, Food Workers Food Justice, and Movements (a newsletter of Food Sovereignty Tours)—received a much-needed facelift in 2013. With a new format and compelling analysis of current events by staff and interns, the newsletters have increased their subscribers by 35, 58 and 40 percent respectively. To subscribe, visit: www. foodfirst.org/get-involved/stayinformed/ 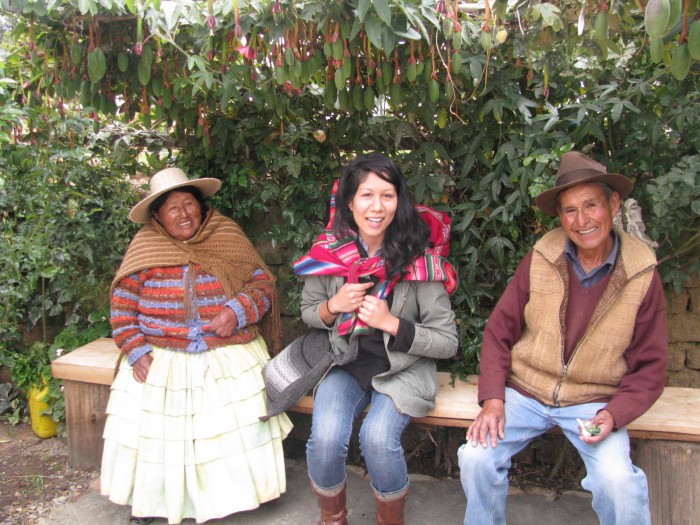 Our Food Sovereignty Tours run by former Program Coordinator Katie Brimm added South Korea to its destinations in collaboration with the Korean Women Peasant’s Association. In 2013, the program took a total of 56 participants to four countries. We also hosted several report back events and educational calls to bring our international experiences home to our communities. Now in its fourth year, the program continues to advance Food First’s educational mission by bringing people to the front lines of our global food movement.

Here are the financials IRS 990 for the fiscal year July 2013 to June 2014 and the audited financial statement for the same period. 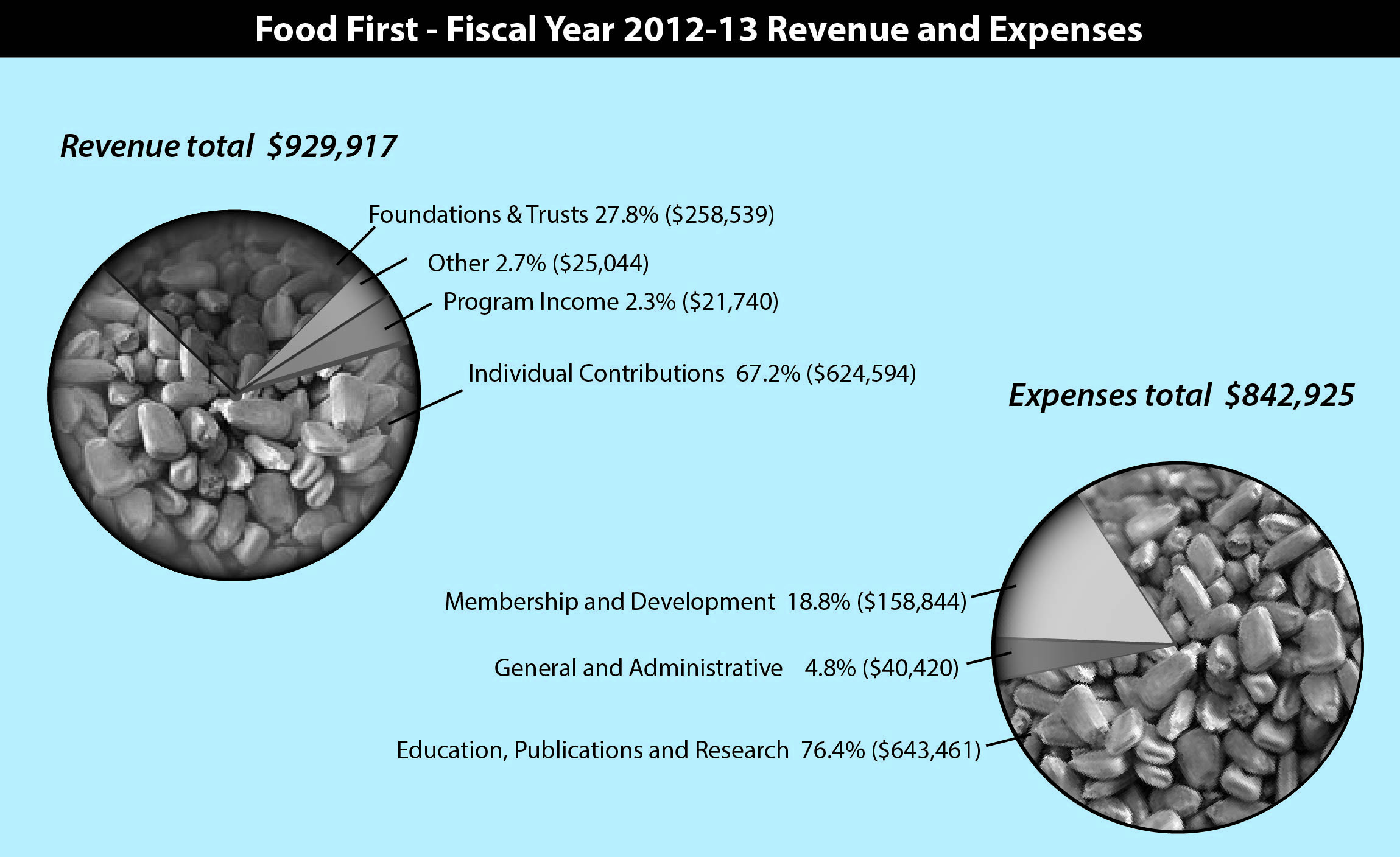