Agriculture: The Next Battleground for Climate Justice

[The] soil washed away from the high land in these periodical catastrophes forms no alluvial deposit of consequence as in other places but is carried out and lost in the deeps. You are left with something rather like the skeleton of a body wasted by disease; the rich, soft soil has all run away leaving the land nothing but skin and bone.1 – Plato

Calls to limit the environmental damage caused by the food system are ancient. Just forty years ago, in Limits to Growth, the world’s leading scientists warned that Western civilization was headed for overshoot and collapse. But the conservation management they counseled flew in the face of Cold War strategies to knit Third World countries into the capitalist bloc through economic expansion and increased resource use.  When the Soviet Union fell in 1991, capitalism exploded across the planet and governments abandoned environmental, labor, and market regulations for the will of the “free market.” The world’s resources—and the food system—were sold off to the highest bidder, ushering in an era of climate change and mass species extinction.

How we produce and consume food is contributing to climate change and social upheaval, ultimately undermining our ability to produce food at all. But the responses peddled by the industries that caused our environmental crises in the first place are quick technical fixes rather than systemic solutions. Switching to a climate-friendly food system is running up against the entrenched power of industrial agriculture, turning the food system into the next battleground in the struggle for climate justice.

What is Climate Justice?

Industrial farming is directly responsible for 14-24 percent of global greenhouse gasses (GHGs).3 Half of all applied fertilizer ends up in the atmosphere or in local waterways. Livestock produces 18 percent of GHGs.4 Deforestation, 70 percent of which is undertaken to make way for agriculture, constitutes another 18 percent of global emissions.5 What we eat is responsible for more carbon pollution than all the world’s planes, trains, and automobiles. All in all, what we eat accounts for nearly a third of all GHGs.6

Food for Feed, not for Need

Nearly 40 percent of industrial agricultural production is for feed and fuel crops—not hungry people. Industrial agriculture’s practices need changing, but so does the larger, interlocked, global form of production. Industrial meat’s “ecological hoofprint” uses up to 30 percent of all agricultural land for maize, soy, barley, sorghum, oats, and canola in a pattern referred to as “oceans” of monocultures and “islands” of concentrated animals.7 Capital-intensive CAFOs (confined animal feedlot operations) concentrate millions of pigs, poultry, and cattle in cramped pens and corrals, where high-protein feed is fed to animals that are pumped with antibiotics and hormones to encourage high productivity and fast growth. Not limited to industrial countries, this highly polluting form of intensified, accelerated production is spreading worldwide.8

“Biological speed-up” is the holy grail of industrial agriculture because it produces more profits in a given amount of time. Selective breeding, genetic engineering, and the use of antibiotics and growth hormones drastically reduce the growing time of animals on factory farms.9 Broiler chickens “mature” in just eight weeks, growing over a pound a week while sitting in the dark on manure-caked floors because so much of the energy they consume is converted into growth that they can’t stand up. Dairy cows are biologically exhausted after three lactations and sold for hamburger. The CAFO manure ponds are major environmental hazards and the hormones and antibiotics used in animal production disrupt human hormonal development and endocrine functions, as well as creating resistant bacterial strains.

The Trifecta of Climate-smart Agriculture

Proponents of industrial agriculture claim that they are going to produce more on less land, pollute less, conserve biodiversity, and become more resilient in the face of climate change. The climate-smart agriculture they espouse contains three, interrelated concepts:

These concepts allow for a wide range of production techniques. Everything from peasant agroecology to industrial CAFOs are permitted, as long as the specific innovation is an improvement over the prior practice. This is part of a global climate adaptation strategy that is supposed to improve upon existing practices while integrating all food production systems into global value chains.

The overarching justification is—of course—to end hunger by increasing food production (read: we must continue the industrial overproduction of food).  It is based on several heroic assumptions.

The first assumption is that chemical-intensive monocultures are more productive than agroecological polycultures. This grounds the claim that only the application of synthetic fertilizers, pesticides, herbicides, and GM seeds can produce enough food to feed the world.

The second assumption is that agriculture necessarily destroys biodiversity. This grounds the claim that limiting the destruction of biodiversity to intensively farmed, chemically dependent monocultures will avoid agricultural expansion onto new land, thus conserving biodiversity while avoiding increasing GHGs.

The third assumption is that inefficient application of chemical inputs – not the rates of application– is the cause of agricultural pollution and GHGs. Gains to efficiency (through precision agriculture) will bring higher profit margins to farmers and they will have no need to expand operations onto new lands.

These assumptions are deeply flawed. Large-scale, chemical-intensive monocultures are not more productive than smallholder polycultures. True, large, industrial monocultures produce more per unit of labor because of their high degree of mechanization, and a hectare planted to monocultural maize will produce more maize than a hectare planted to the traditional maize–beans–squash polyculture. But small farms consistently out-produce large farms in pounds per acre.10 There is ample evidence demonstrating the high productivity and strong resilience of agroecologically managed family agriculture.11 In Nature’s Matrix, researchers showed that agroecological farms are themselves rich in biodiversity and actually serve to replenish and enrich biodiversity in the surrounding environment.12

To the end of his days, Norman Borlaug, the father of the Green Revolution, held that high-producing, early adopters of high-yielding varieties (HYVs) would push less efficient, late adopters out of business, thus reducing the total amount of farmland. This turned out to be false. Global studies show an increase of both agricultural yields and cultivated areas. Instead of being pushed out of agriculture, many peasant farmers were pushed to the agricultural frontiers. Further, with the “Jevons paradox,” as prices fall (due to overproduction), demand for commodities expands, which brings more land into production.13 Farmers are also forced to expand the production of commodities to make up for the lower prices caused by overproduction. George Naylor, a grain farmer from Iowa, explains the environmental dilemma: “Any time you increase yields, you cut the cost of production, making cultivation on marginal land even more likely.”14

The lack of a systems framework in climate-smart agriculture leads to categorical errors regarding the true extent of GHG emissions. Simply calling for slightly more efficient forms of chemical-intensive, monocropped feed production ensures the inefficient and damaging production of industrial meat. As such, “climate-smart agriculture” supports the same old “climate-stupid consumption.”15

The More Things “Change,” the More They Stay the Same

By putting systems change safely outside their purview, climate-smart agriculture not only affirms and normalizes industrial agriculture, it also avoids addressing how the industrial food system favors some forms of production over others and ignores how some forms can exploit others.

For example, large-scale plantation agriculture for feed and fuel crops crowds out food-growing smallholders without providing jobs to compensate for the loss of their livelihoods. Contract farming traps farmers in a serf-like form of debt bondage, no matter how sustainable the intensification. Large-scale monocultures and CAFOs, with all their inherent ecological and economic risks, fit nicely within the climate-smart framework: all they have to do is reduce the footprint of their manure ponds and be more judicious with the tremendous quantities of chemicals, hormones, antibiotics, water, and energy they consume. The quality of the food (or of the diets of consumers) is not of concern.

But wouldn’t it be better if all farms produced more food on less land and were more sustainable? Well, perhaps. But do we want to sustain CAFOs, contract farming, and monocultures on plantations or huge farms? Shouldn’t we be looking at the small-scale agroecological farms that are already producing high yields using practices that work in concert with the environment and restructure the food system to ensure their economic future?

Technical fixes designed to stabilize the existing corporate food regime – not change it—frequently come into conflict with more systemic approaches—like agroecology, land reform and market reforms. The basic criteria for a regime-friendly technical fix is that it be patentable, profitable, compatible with the existing technological model, and not challenge large, industrial economies of scale. In other words, technical fixes are preferred when they can be turned into commodities.

From Overshoot to a Just Transition

Technical fixes to industrial agriculture cannot avoid the destructive trajectory we are on to overshoot Earth’s carrying capacity.  Our political and economic system is not just driving our food system, but our entire way of life. Without taking on the corporate food regime directly, even existing alternatives like organic agriculture, urban farming, community-supported agriculture, and agroecology won’t be able to compete with the political, institutional, and market power of industrial agriculture. 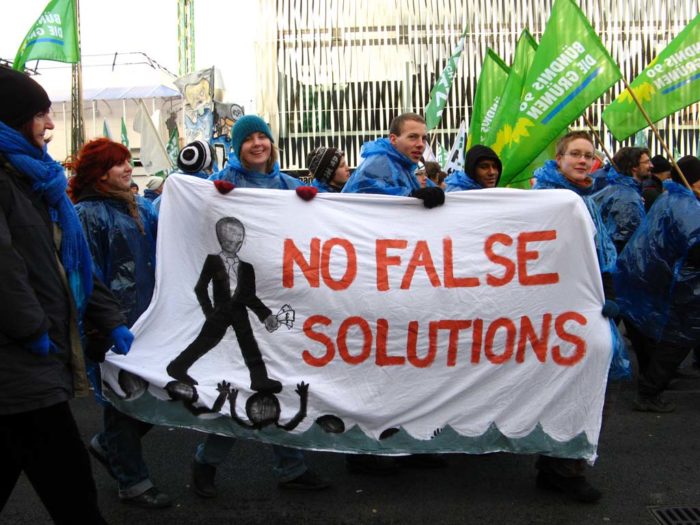 Addressing climate change and the food system together requires a concerted strategy to transform the larger, socio-economic system. This is only possible through the power of a broad-based social movement led by the people and communities that are suffering the brunt of the food and climate crises. Luckily, this movement exists and is growing worldwide.

The Just Transition movement is building the political power of workers, farmers and underserved communities by tackling economic inequality and climate change across the urban-rural divide.

A Just Transition centers those most impacted by climate change as leaders in a fair shift from an extractive economy to a regenerative one that is ecologically sustainable and equitable for all. It aims to democratically transition whole communities to build thriving economies that provide workers with dignified livelihoods that are ecologically resilient.

Born out of a fusion of the environmental justice and labor movements, the Just Transition is a grassroots response to the mainstream environmental movement that prioritized pristine ecologies over the longtime indigenous, black, and immigrant stewards of the land whose labor and land were stolen. As a movement, the Just Transition is based on a set of principles, as well as practices, “rooted in low-income communities of color, who [see] the need to phase out the industries that [are] harming workers, community health and the planet; and at the same time provide just pathways for workers to transition to other jobs.”16

In the face of the climate debacle and the industry’s false solutions, the Just Transition holds out hope for the policies that restructure our economy and make food, farm, and climate justice a reality.