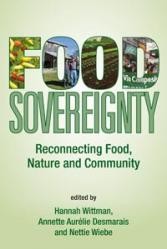 Advocating a practical, radical change to the way much of our food system currently operates, this book argues that food sovereignty is the means to achieving a system that will provide for the food needs of all people while respecting the principles of environmental sustainability, local empowerment and agrarian citizenship. The current high input, industrialized, market-driven food system fails on all these counts. The UN-endorsed goal of food security is becoming increasingly distant as indicated by the growing levels of hunger in the world, especially among marginalized populations in both the North and South. The authors of this book describe the recent emergence and the parameters of an alternative system, food sovereignty, that puts the levers of food control in the hands of those who are both hungry and produce the world’s food – peasants and family farmers, not corporate executives. As the authors show in both conceptual and case study terms, food sovereignty promises not only increased production of food, but also food that is safe, food that reaches those who are in the most need, and agricultural practices that respect the earth.

Food sovereignty promises not only increased food production, but also food that is safe, food that reaches those most in need, and agricultural practices that respect the earth.

As an alternative to the neoliberal model, peasants, small-scale farmers, farm workers and indigenous communities organized in the transnational agrarian movement La Vía Campesina argue that the current, and linked, food, economic and environmental crises are in fact the direct result of decades of destructive economic policies based on the globalization of a neoliberal, industrial, capital-intensive and corporate-led model of agriculture. La Vía Campesina, formed in 1993 and now representing 148 organizations from sixty-nine countries, has become one of the strongest voices of radical opposition to the globalization of an industrial and neoliberal model of agriculture, claiming that “the time for food sovereignty has come.”

Peasant movements, urban-based social movements, non-governmental organizations (NGOs) and indigenous peoples have been instrumental in putting food sovereignty on the agenda, and consequently, they have succeeded in shifting the terms of the debate around food, agriculture and rural development at the local, national and international levels. Because food sovereignty aims to transform dominant forces, including those related to politics, economics, gender, the environment and social organization, there will, no doubt, be a long and hard struggle to see food sovereignty become the standard model for food production and rural development. This book contributes to this struggle by engaging in a conversation that identifies and expands the meanings, understandings and implications of food sovereignty in an international context.

Annette Aurelie Desmarais was a farmer for 14 years. She has a MA in Gender and Development from the Institute of Development Studies, University of Sussex and received a PhD in Geography from the University of Calgary. She is currently Associate Professor in the International Studies Program at the University of Regina. Her key areas of research are food sovereignty, globalization and agrarian change, rural social movements and social justice, development theory and practice, gender and international development. She is currently involved in on-going research with the international peasant and farm movement, La Vía Campesina. Annette’s book La Vía Campesina: Globalization and the Power of Peasants was nominated for the Chadwick F. Alger Award and the Lionel Gelber Prize; it has been published in French, Spanish and Italian. , She was awarded the Eric Wolf Prize by the Journal of Peasant Studies (JPS) for the article entitled “The Vía Campesina: Consolidating an International Peasant and Farm Movement.”

Nettie Wiebe is an organic farmer and professor of ethics at St. Andrew’s College, University of Saskatchewan. She was Women’s President of the National Farmers Union and then served four years as the President of the NFU – the first and only woman to have led a national farmers’ organization in Canada – as well as a member of La Via Campesina’s International Coordinating Commission (ICC). She is actively involved in local and national politics in Canada, and her research focuses on agrarian feminism and the intersection of environmental, agricultural and women’s issues in rural communities.

Hannah Wittman received her degrees in development sociology from the University of Washington (BA) and Cornell University (MS, PhD). She has a family farming background and has several years of experience in agro-forestry extension work in Latin America. She conducts collaborative research on local food systems, farmer networks and citizenship with the Landless Rural Workers Movement (MST) and La Via Campesina in Brazil and with local food networks in British Columbia as part of an international network of scholars engaged in applied and theoretical applications of the concept of food sovereignty and sustainable food production. With specific research interests in environmental sociology, agrarian citizenship, and agrarian social movements, she has published articles in the Journal of Rural Studies, Journal of Peasant Studies, the Canadian Journal of Development Studies, Land Degradation and Human Organization.

Download the Introduction: “The Origins & Potential of Food Sovereignty.”

Click here for instructions on requesting a review, desk or course adoption copy of this book.