Food, Climate, and the Green New Deal: A Social Contract for Justice?

The Green New Deal has taken the country by storm. The non-binding Resolution calls for massive public investment in green jobs and green infrastructure to achieve “net-zero greenhouse gas emissions through a fair and just transition for all communities and workers… to be accomplished through a 10-year national mobilization.”1

Unsurprisingly, the Green New Deal (GND) introduced by Representative Alexandria Ocasio-Cortez (D-NY) and Senator Ed Markey (D-MA), has been ignored by industry, mocked by Republicans and vilified in the conservative media.2 Though it has nearly 70 co-sponsors, powerful mainstream Democrats are tiptoeing around it, perhaps because they are nervous about angering the fossil fuel industry. And while the GND has been overwhelmingly celebrated by environmentalists, social justice groups are giving it a cautious welcome.3

Ocasio-Cortez and Markey’s GND follows on prior initiatives from economist Thomas Friedman,4 the British Green New Deal Group,5 the United Nations Environment Program’s Global Green New Deal,6 the more radical Green New Deal7 from the US Green Party, and Van Jones’ book, The Green Collar Economy.8 All draw inspiration from the original New Deal that sought to pull the United States out of the Great Depression. Saving family farms, restoring and conserving hundreds of millions of acres of agricultural land, breaking up big trusts, and putting the country’s unemployed back to work were its pillars.

Though it has nearly 70 co-sponsors, powerful mainstream Democrats are tiptoeing around it, perhaps because they are nervous about angering the fossil fuel industry.

Both the original New Deal and the GND have followed on decades of laissez-faire, free-market capitalism, massive concentration of wealth, and devastating financial crashes. Both address environmental catastrophe, and income inequality (though not wealth inequality) through massive public investment. Aside from the nine decades separating one new deal from the other, they have other fundamental—and illustrative—differences.

The United States was largely rural in the 1930s and the first New Deal began with the Agricultural Adjustment Act that controlled overproduction, ensured parity prices to farmers and levied taxes on processors and middlemen. As Iowa farmer George Naylor explains: 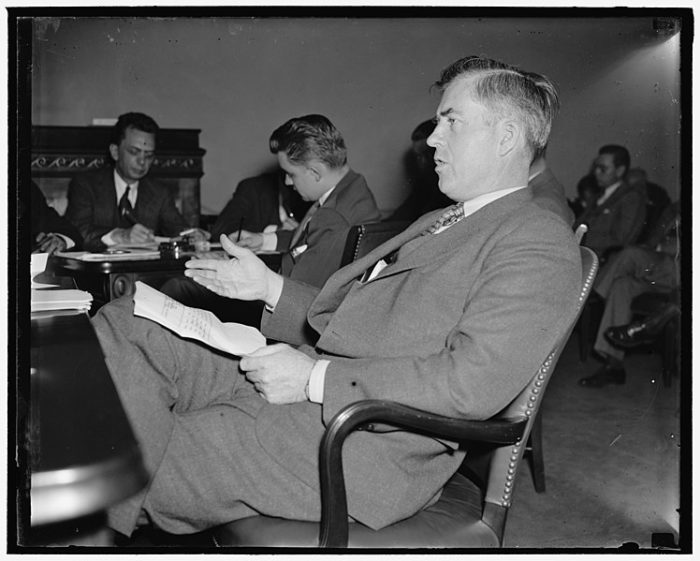 Secretary of Agriculture Henry A. Wallace who was a critical advocate of the AAA. Library of Congress, Prints & Photographs Division, photograph by Harris & Ewing.

“Parity” was the name associated with these programs because it meant the farmer would be treated with economic equality and prices would be adjusted for inflation to remove the destructive cost-price squeeze and the need for farmers to overproduce their way out of poverty and debt. It was understood that the farmer’s individual “freedom” to do whatever he or she wished with the land would be tempered for the good of all farmers and society. A social contract was established.”9

The Green New Deal, crafted by ­urban-oriented policy writers, says very little about agriculture, though it does propose, “… working collaboratively with farmers and ranchers in the United States to remove pollution and greenhouse gas emissions from the ­agricultural sector as much as is technologically feasible… by supporting ­family farming; by investing in sustainable­ farming and land use practices that increase soil health; and by building a more sustainable food system that ensures universal access to healthy food.”10

“Parity” was the name associated with these programs because it meant the farmer would be treated with economic equality and prices would be adjusted for inflation to remove the destructive cost-price squeeze and the need for farmers to overproduce their way out of poverty and debt.

But for many farm justice leaders, this approach does not deal with the structural obstacles that make it difficult for farmers to farm without emitting greenhouse gases. For Anthony Pahnke and John Peck of Family Farm Defenders in Wisconsin, the GND needs to address structural issues: like the land question, parity, and farm justice:

“Given that agriculture is a major US source of greenhouse gas emissions, a Green New Deal also requires a just transition to a food and farm system which promotes agroecological practices that build soil carbon, protect air and water quality, and enhance biodiversity. Farmland is not just a speculative commodity to be concentrated in a few hands, but a vital resource that should be dedicated to supporting independent family farms and more widely distributed as part of a broader reparations agenda promoting food sovereignty.”

“Because overproduction is one on the main drivers of unsustainable practices, a Green New Deal must include ­policies that enable family farmers to remain viable­ on their own land through supply management, credit access, and parity­ pricing—not only covering the cost of production, but guaranteeing a living wage for all those engaged in the food and farm system—while also expanding programs for young, beginning, minority,­ and other disadvantaged farmers interested in growing healthy food in a responsible, equitable manner that will also cool the planet.”

But for many farm justice leaders, this approach does not deal with the structural obstacles that make it difficult for farmers to farm without emitting greenhouse gases.

Elizabeth Henderson of NOFA, the Northeast Organic Farming Association, wants the GND to distinguish between corporate agriculture interests and family farmers, and needs greater involvement of farmers and farm workers, “I think it’s really essential that farmer organizations and farmworker organizations have their voices heard in the discussion of what should be in the Green New Deal because there are going to be corporate pressures that will see how they can profiteer from this. They’re very good at that. There is not adequate understanding among some of the Green Party people, the Sunrise folks, the Extinction Resistance of what exactly it is that farmers and farmworkers really need. Those people are great allies and they’re all revved up and that’s terrific but we have to be sure that they understand what works concretely for farmers and farmworkers based on our living experience that those people haven’t had.”

Edgar Franks from Community to Community, an organization that works with farmworkers in Skagit County, Washington says, “When you compound working outside with harsh weather conditions, it’s a recipe for a disaster, a humanitarian crisis. A lot of that goes unnoticed as with other issues of immigrants and farmworkers. [Farmworkers] are affected by pesticides, the drought, poverty…when we think about climate justice, part of it is the environment and the resources, but it’s also about the consequences of being poor and being an immigrant that put you at a disadvantage because people don’t see you as a political force. So for climate justice to be successful we need to organize to change the political system.”

Can the Green New Deal address the conditions and demands of farmworkers? Edgar asserts: 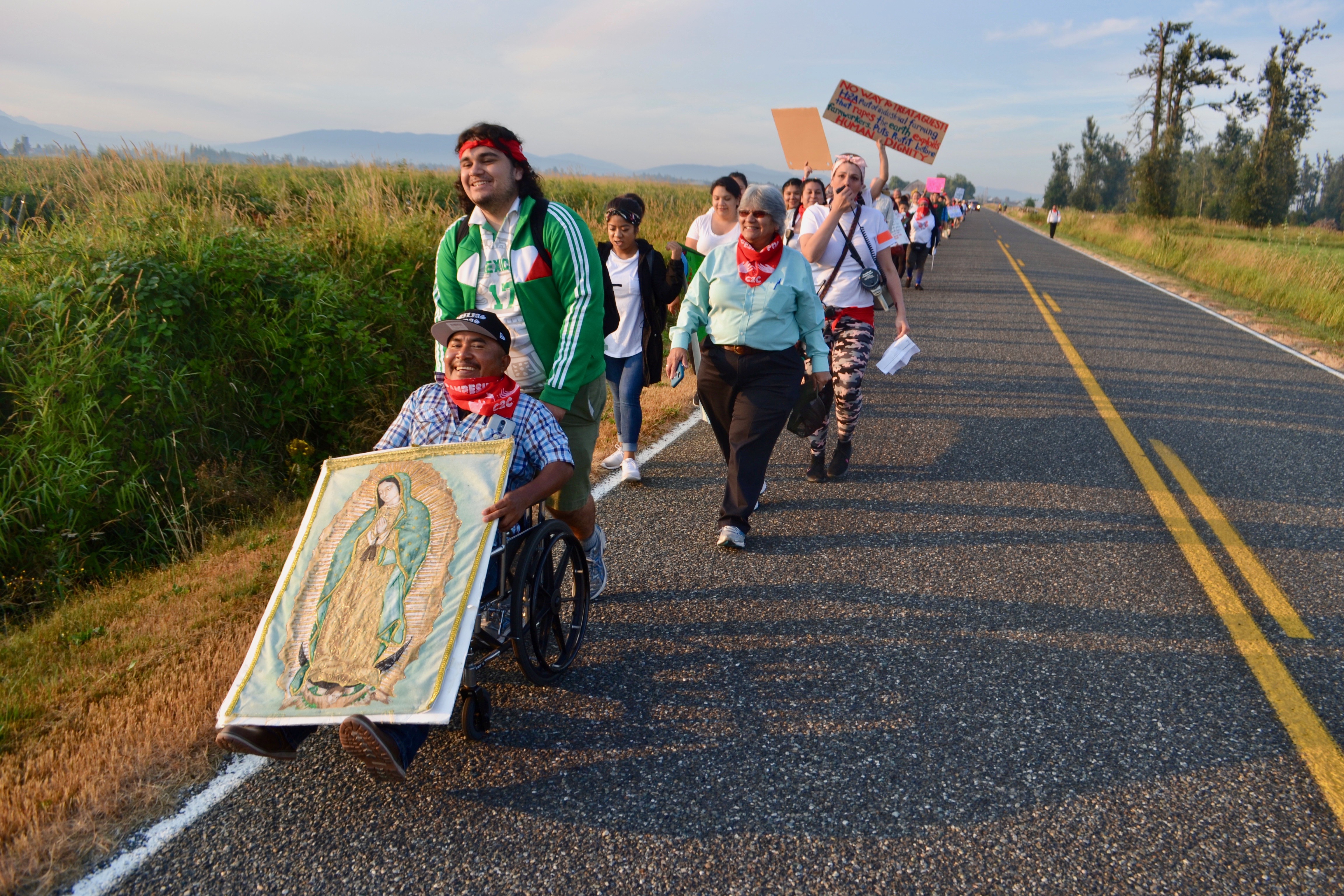 Farmworkers, organizers, and activists march 12 miles to reflect the day of a farm worker, which lasts 12 hours from start to finish. Photo courtesy of Alexandria Jonas (CC BY 2.0).

“Our food system is so dependent on fossil fuels that we’re making [climate] conditions even worse. At the same time we’re making profits, but on the backs of farmworkers. We don’t want to be the bargaining chip. We need strong labor laws and environmental laws that protect the workers in the community because we don’t want our food industry to just be made for profit. The effort needs to be led by farmworkers. So we definitely see that the Green New Deal could be an opening to that but farmworkers and rural communities need to be more involved.”

So for climate justice to be successful we need to organize to change the political system.

The first New Deal mobilized the Civilian Conservation Corps (CCC), to provide jobs to the country’s 15 million unemployed workers, but was weak on ensuring for Africans-Americans, farmworkers, and communities of color.11 Black and white sharecroppers, for example, were left destitute by the Agricultural Adjustment Act that paid plantation owners not to produce and thus shut down the markets for the cotton produced by sharecroppers. President Roosevelt’s “Indian Reorganization Act” replaced existing tribal law and constitutions with new forms of tribal self-governance.12 The “Indian CCC” provided Native Americans with 15,000 jobs; the privatization of indigenous land was terminated and some of it was returned or purchased with federal funds. But the new tribal constitutions put stronger limits on tribes’ sovereignty.13 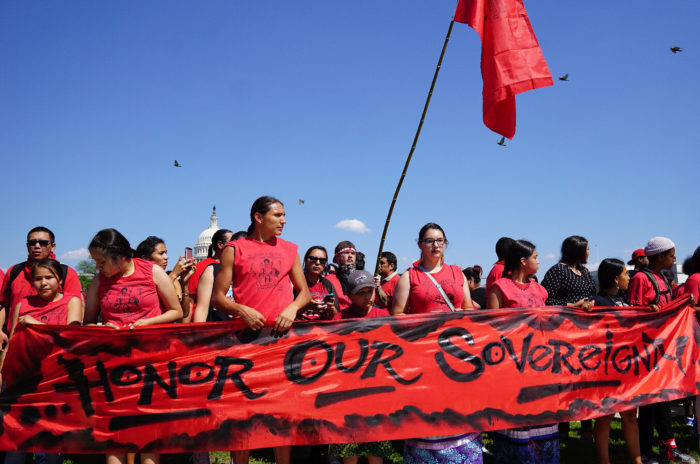 In an official statement, IEN, the Indigenous Environmental Network, expressed support for AOC and Markey’s efforts, and hailed the Green New Deal as a “[Critical] process to change the national conversation in regards to addressing the climate crisis at hand.” The IEN is “[Encouraged] to see these congressional leaders take charge to help Indigenous communities and Tribal nations protect their homelands, rights, sacred sites, waters, air, and bodies from further destruction.”15

Nonetheless, they have not given their full endorsement: “[We] remain concerned that unless some changes are made to the resolution, the Green New Deal will leave incentives by industries and governments to continue causing harm to Indigenous communities… the most impactful and direct way to address the problem is to keep fossil fuels in the ground. We can no longer leave any options for the fossil fuel industry to determine the economic and energy future of this country.”16

In a press release, the Climate Justice Alliance (CJA) claimed: 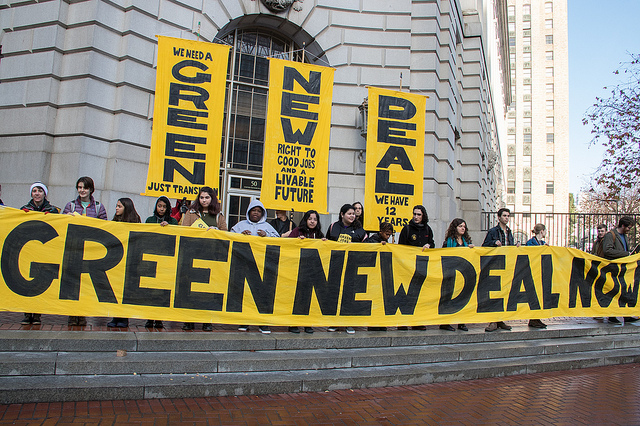 “A whole-society approach to climate change must be centered on a Just Transition for communities and workers as we move beyond the existing extractive and fossil fuel-driven economy… A deep decarbonization approach that applies an environmental and social justice lens without carbon markets, offsets and emissions trading regimes or geoengineering technologies, needs to be embraced. A Just Transition coupled with a commitment to Just Recovery and Rebuilding, community-driven Climate Action plans through block grants earmarked for community-based organizations, and community development funds would go even further to repair historical harm and center community innovation for water, land, air, and energy resources, in both urban and rural areas, including Indian Country.”17

We can no longer leave any options for the fossil fuel industry to determine the economic and energy future of this country.

The CJA Campaign Director Ananda Lee Tan insists that to be effective, the GND needs to replace ambiguous, neoliberal, corporate policy language… with concrete and just goals such as “replacing dirty energy infrastructure through a just transition to a regenerative economy, led by frontline communities and workers.”

It appears that on one hand, farm, farmworker, and climate justice movements are supportive of the GND initiative, and welcome the focus on equity and the climate vulnerability of frontline communities. On the other hand, they are calling for more structural reforms (much like the original New Deal) and direct involvement in its framing and implementation.

The first New Deal established a social contract between the banks, big industry, farmers and laborers, to pull the country out of the Depression and save American capitalism. It provided a bigger share of the economic pie to the working class until the introduction of free market policies that drove a steady march to the “privatization of everything” under neoliberalism.

Essentially, the Green New Deal is proposing a new social contract to roll back global warming and establish economic equality. To have a chance at becoming legislation, the GND will need a sustained, engaged groundswell of public support. Bringing this new social contract into existence is only possible if the Green New Deal puts the voices, the concerns, the leadership, and the indomitable hope of the social justice movements firmly at its core.