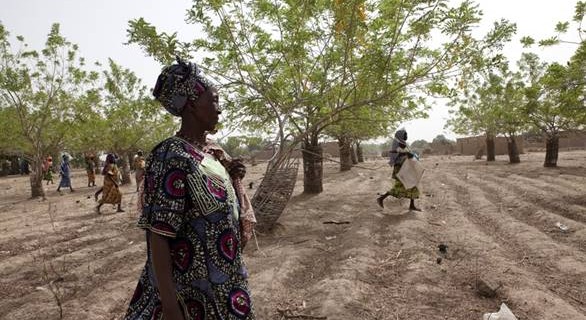 Green Manure Crops in Africa: A Report from the Field

Roland Bunch’s work with indigenous Mayan farmers in the highlands of Guatemala in the 1970s enabled the Campesino a Campesino (farmer-to-farmer) movement to sweep through Mexico, Central America and Cuba in the 1980s and 1990s. Cover crops were a central component of the movement’s success. In this personal letter, Roland shares his recent work with the successful farmer-to-farmer spread of cover crops in seven African countries.

Back in 2009-10, during a 6-nation study I carried out in Africa for World Renew, I realized that because 80% of smallholder farmers in sub-Saharan Africa now have less than 2 hectares of land (roughly 5 acres), they are no longer able every year to have 3/4 of their land sitting idle (ie. in a fallow) and still feed their families with what’s left. Fallowing is the way by which African farmers have kept their soil fertile for some 3,000 years. But as their plots have diminished in size (mostly because of population growth, but also because a lot of land has become wasteland), they have gradually reduced their customary fallow periods from 15 years to 10 years, 8 years, 4 years, and down to nothing. In most of sub-Saharan Africa, fallowing is now a thing of the past; it is in its death throes.

In most of sub-Saharan Africa, fallowing is now a thing of the past; it is in its death throes.

This is a once-in-human-history event, even though the rest of the world hasn’t given it two lines of text in any leading newspaper (as far as I know). Yet it will have major, perhaps dire, consequences for tens of millions of people, because as fallowing dies out, the organic matter content of farmers’ soils starts dropping, crop yields diminish, and people go hungry. My study found that yields of staple foods were decreasing by about 5 to 10% per year!

I predicted in a chapter of the State of the World 2011 that the 150,000,000 people living in the rural areas of the 15 or so lowland, drought-prone countries of Africa could well be suffering from a major famine about five years from then. These last few months a number of news sources have said that a famine is stalking Africa even as I write. Already they are saying that the famine in Ethiopia is the worst in 50 years, and other countries, such as Somalia and South Africa, are also going to need huge amounts of food aid, stretching the world’s emergency food supply to or beyond its limits.

These news sources attribute the drought to El Niño, because soil problems are unfortunately just plain in- visible to most news reporters. Whether the predicted famine of 2016 is just a one-time El Niño phenomenon or the beginning of a long-term soil-depletion based tragedy, only time will tell. Of course, it could well be some combination of both. What we do know is that of the approximately 25 nations around the world that are suffering from child stunting rates of over 40% (stunting is a degree of malnutrition or under-nutrition so severe that both the mental and physical capacity of the child are permanently damaged), 14 of those nations are among the lowland, drought-prone African nations that I signaled back in 2011. It is a serious and chronic health crisis already, whether or not it is actually an official famine. 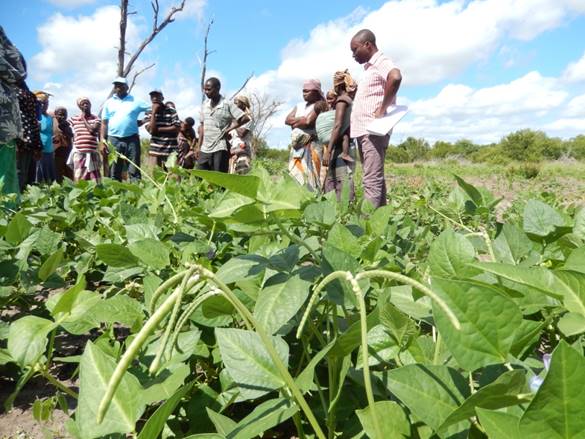 Farmers and program personnel in Mozambique are impressed about the incredible ability to survive a drought of the high-protein 60-day cowpeas that they have planted for the first time. All the crops in the background were stunted by last year’s drought.

So what can be done? Asia and Latin America have already, by and large, gone through this process of the end of fallowing, but they had relatively large and growing indus- trial sectors with the large middle classes, high schools, universities and infrastructure that allow farm families to leave agriculture in relatively large numbers and still find a moderately decent life earning a living in other sectors of the economy. Africa does not have enough of any of these things. Sure, the flood of young people out of villages and into Africa’s cities is huge —to the point that the average smallholder farmer in Africa is now over 50 years old. But even so, life on the farm is getting worse every year.

People could try to use chemical fertilizer to improve their yields, but fertilizer doesn’t pay for itself on badly degraded soils, especially in droughty areas in which people pay for the fertilizer every year but all too often get no harvest in return. Fertilizer on depleted, droughty soils is just not an option. Some countries are subsidizing chemical fertilizer, but they are already losing their enthusiasm for this unsustainable option. The Minister of Agriculture of one African country told me that with the money they had spent on fertilizer subsidies over the previous five years, they could have built a fine new school in every village in the nation. Farmers could use animal manure, but many already do that, and the amount of manure they have isn’t enough to maintain the fertility of even 10% of their land. They could make compost, but in most droughty areas they would very quickly run out of plant material to do this, and the costs of making enough com- post to keep 2 hectares of land fertile would once again be prohibitive.

So green manure/cover crops (gm/ccs) are the only feasible and sustainable route farmers can take. (Gm/ccs are plants of any kind that farmers use in order to, among other things, fertilize the soil and/or help control weeds. Intercropped gm/ccs are, in effect, a fallowing system in which both the fallowing function and crop production are occurring simultaneously in the same field.) A farmer using gm/ccs can produce over 100 tons of biomass (green weight) on two hectares of land. By way of comparison, I have never heard of a smallholder farmer ever making and applying more than 10 tons of compost in a year. This quantity of biomass is more than enough not only to maintain the fields’ fertility, but to gradually restore the soil, even on wastelands, to its naturally high fertility. Furthermore, this organic matter is produced all across his/her own field, so there are no transportation costs whatsoever, which is extremely important, as most smallholder farmers must carry all other soil amendments out to the fields either on an oxcart, on pack animals, or on their own backs and spread them by hand. Even more important, most of the green manure/cover crops we use also produce high-protein food, which usually can be consumed or sold in local markets.

The only problem here is that finding the right green manure/cover crop (gm/cc) for each situation takes a knowledge of scores of different leguminous plants and how to fit them into farmers’ cropping systems. And whereas the Brazilians and a group of us working in Central America have spent some 32 years researching scores of possible systems, read full report