As we gathered to consider crafting this year’s Annual Report, it was hard not to be overwhelmed thinking about the hardship and suffering caused by the COVID -19 pandemic.

This past year truly tested us all. But consistent with the old adage “every cloud has a silver lining,” it was gratifying to see the many ways Food First was able to resiliently adapt in order to provide useful and informative analysis highlighting how our present food system does not serve us all equally. COVID-19 only made the inequities in the food system clearer. Otherwise, low paid “essential workers” would not be forced to risk their lives in order to provide for their families. Nor would we have seen the staggering rise in hunger metrics confirming how families struggled to put food on the table.

It was also humbling to witness how you, our committed Food First supporters, steadfastly contributed to ensure we would survive. Food First has emerged more focused and better positioned as a “Think and Do Tank” to address the root causes of hunger and take action alongside others fighting to change our food system for the better.

In this spirit, Food First dedicates this year’s annual report to all of you … because you all demonstrated that the bond we have forged over the last 46 years is so strong that even a pandemic could not stop us.

Supported Essential Workers Inside the Food System During the Pandemic

Because of your support, Food First was able to shed light on the injustices facing essential workers throughout the COVID-19 pandemic. In May, photojournalist David Bacon wrote an in-depth special report highlighting both the struggles and opportunities for small farmers and farmworkers during the height of the crisis. In Family Farmers and Farmworkers Face the Virus: How Food Sovereignty Activists See the Crisis as a Pivotal Moment for Change, Bacon shared experiences and solutions of farmers and farmworkers across the United States, from New York to Wisconsin to Detroit to Washington and California. The thread that connects these stories of farmers, farmworkers, and activists is the understanding that unequal political power and an unequal distribution of resources drive injustices in the food system. But beyond just pointing out the problems of the food system, these food sovereignty activists also offered a variety of systemic solutions that would fundamentally reshape our food system. The pandemic-fueled crisis only sharpened these unjust inequalities and further highlighted the systemic solutions that were present all along. 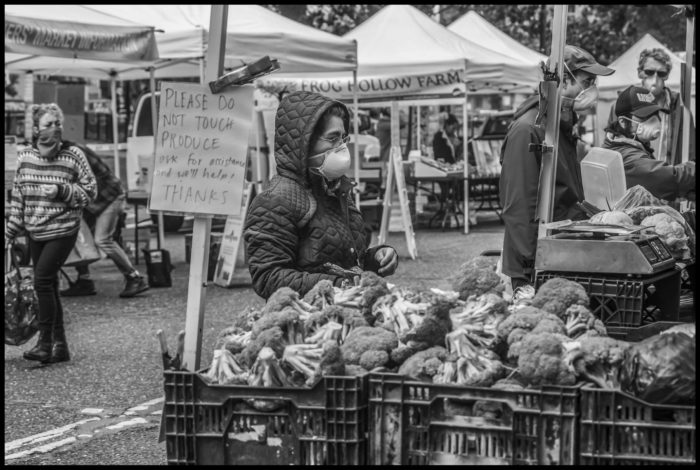 In addition to this special report, in April 2020, Food First also produced a timely analysis on the food system workers fighting for basic rights and dignity at the height of the pandemic. In Food Workers Have Always Been Essential – Give Them What Is Theirs, we covered how our market-driven food system depends on driving down wages in order to produce profits, which creates a large, precarious and impoverished workforce. Much of this workforce is also disproportionately gendered and racialized. We illustrated the history of this process in the United States and how the pandemic was paving the way for even further corporate consolidation of the food system as companies like Amazon and Walmart not only weathered the storm, but expanded their profits considerably. But as we noted, the pandemic made it abundantly clear that essential workers, not CEOs, keep society running in good and bad times. Moving into the post-pandemic future, one of the main goals of building power and justice in the food system means unionization, pro-labor legislation, higher wages, and more.

In December, Food First published Rivers of Finance, but Not a Drop to Drink: Financialization, Power, and Agriculture in California’s Parched Central Valley by Tom Philpott, highlighting the growing influence of finance on farming. In this Backgrounder, Philpott breaks down the myriad financial institutions and wealthy individuals who have looked to produce big profits on the lucrative nut trade growing in California’s agricultural center. As global demand for nuts skyrockets and land values continue to rise, financiers increasingly view investments in industrial agriculture as a safe, steady stream for profits. But while growing orchards of different nuts can produce higher profits compared to fruits and vegetables in today’s current capitalist market, there’s just one jarring problem: water. Orchards require excessive amounts of water year-round, but California continues to find itself in consistent cycles of severe drought, putting serious pressure on all of California’s agriculture. Will fruits and vegetables be sidelined as the more profitable nut orchards guzzle up California’s decreasing water supply? As Philpott shows, Wall Street is betting that their political connections and power can keep water flowing towards the orchards despite the glaring unsustainability. What is good for both Wall Street and quick profits is oftentimes not good for farming, the land, and the environment. Food First will continue in the coming years to monitor and highlight issues like this, where the financial greed of the few endangers broader societal needs.

Produced Webinars to Educate the Public

Supporting farmworkers who are organizing for safer, healthier working conditions and fair wages is a critical step towards building a just food system. Last spring, Food First’s analysis, research, and public education supported farmworkers who ensure food makes it to the supermarket shelves and our plates at home. During our first webinar convened in April 2020, we raised awareness of the critical ways that unionization and legislation can improve their lives and increase their power in relation to growers.

The pandemic was raging through farmworker communities, we produced a public education webinar with organizers from Familias Unidas por la Justicia, a farmworker union in Washington, Community to Community, a women-led grassroots organization dedicated to food sovereignty and immigrant rights, and David Bacon, a photojournalist who focuses on labor issues.

The webinar aimed to help people better understand the relationship between agricultural workers, our immigration system, and our capitalist food system. The public saw more clearly than ever the injustices faced by farmworkers as well as other vulnerable low-wage, frontline workers in the food system. Many of these same people who work with food everyday continue to struggle to put food on the table due to low pay. Strengthening the ability to organize and take action at work, and building community support for such measures, is crucial to advancing the interests of the very people who make our food system function.

We covered how the pandemic was being used as a catalyst for the Trump administration to expand the unjust H-2a visa program that imports temporary contract labor from Latin America. These temporary workers possess very few labor rights when compared to workers in the United States, as they are dependent on remaining with their employer in order to keep their visa. As the panelists noted, such a system is rife with labor violations and inhibits union organizing due to fear of deportation. The panelists were clear that preventing the massive expansion of the highly exploitative visa program, needs to become a central plank in the fight for food and immigrant justice. Struggles for even basic protections from COVID, let alone larger structural changes such as immigration reform, are going to be rooted in struggles via both labor and community organizing. Food First looks forward to continuing this type of support in the coming year.

Following our Spring webinar, Food First conducted another timely and important webinar in the summer of 2020, focusing on the paths forward towards organizing for both a racially and environmentally just future. This webinar saw over 1,000 people register and nearly 600 people attend!

Former Executive Director Jahi Chappell, along with Ahna Kruzic, Raj Patel, and Jim Goodman discussed both the Black Lives Matter protests taking place in the context of the COVID-19 pandemic. While many may have thought that the protest actions against police brutality were simply spontaneous, they weren’t. As Ahna Kruzic made clear, much of the political action over the summer, as well as in American history, has been part of a process of building relationships and social and political power that took place over decades. The lesson here is that it takes years, even decades, of tireless work and movement building to create change when the conditions are just right. Major social changes in history are rarely just spontaneous.

As the panelists pointed out, we also have a rich legacy of multi-racial organizing in the United States inside and outside the food system to pull from when imagining the possibilities of what our justice movements can look like today. This work, taking place slowly over decades, is what strengthens the social fabric of movements and anchors their abilities to push for successful policy changes that we desperately need in the coming years.

It is this type of work, which Food First bolsters with our research and analysis, that can bear fruit for food and social justice in the future.

Shined a Spotlight on Successesof Agroecology from Around the World

Food First has long promoted agroecology, the application of ecology to agricultural systems, as a viable alternative to the severely unsustainable, market-driven industrial farming model. And there have been many examples of success from farmers using agroecological methods to farming. But the challenge ahead will be how we make agroecology develop from “islands of success” to “seas of change?” How can agroecology be advanced, amplified, scaled up and out? Our Issue Brief from February 2020 covered these pressing questions and more, using case studies from around the world to provide a roadmap of how to advance a better future for food and farming.

Your support also made it possible for us to share and amplify the important story of farmworkers pushing for land reform and transitioning to collective farming so they could successfully challenge the power of giant multinational corporations.

David Bacon shared a story that has been decades in the making in the Philippines. Starting in the 1980s, unions struggling to earn fair wages and dignified working conditions under the weight of banana multinational corporations succeeded in pushing for land reform. The major land reform victory opened up opportunities for the farmworkers to become small landowners themselves on land that once belonged to corporations in the form of plantations. Unfortunately, these new farmers were vulnerable to a market still dominated by corporate agriculture.

However, the new farmers soon realized they had far more power collectively rather than individually, so they set up banana cooperatives to farm the land and improved their economic power. Since then, the cooperatives and a support organization called FARMCOOP have succeeded in creating an alternative to forced displacement and migration, changing lives for the better, and serving as a model influence to other farmers and workers throughout the Philippines. Since their beginnings in the 1980s, the cooperatives have become quite successful economically, and have begun transitioning their farms towards more ecological and sustainable forms of farming, undoing decades of environmental degradation caused by large-scale, plantation farming. This beautiful Issue Brief, full of photographs from the past and present, shows how social problems can be solved by collective solutions.