Food First Looks Ahead to the Next Chapter for Social Movements

A raging pandemic that has left over 250,000 dead, roaring protests for racial justice, an economy that is in crisis for millions of people, and the most anxiety-ridden presidential election in years made 2020 feel like decades.

While vaccines for COVID-19 are on the horizon and Donald Trump has been pushed out of the White House by voters, the struggle to end the many injustices that drive hunger, poverty, and inequality continues. In fact, unless any robust economic stimulus bill is passed in the next month, millions more Americans may find themselves unemployed, unhoused, and without enough food to eat.

President-elect Joe Biden’s victory certainly gives space for social movements to catch their collective breath and gain solid footing again after the Trump administration’s four years in power. But the Biden administration will have to be seriously pressured by a coalition of social movement forces if we want to see positive changes to our most pressing problems. Moving forward, what happens over the next four years may determine whether or not we have to endure an even worse, more capable right-wing leader and movement in 2024.

The election showed us that there is an incredible amount of work still to be done in order to create the type of multi-racial, working-class, and mass democratic movement we need to build political power. It is possible, and entirely necessary, if we are to successfully achieve progress on the massive challenges like climate change, living wages, healthcare, hunger, and more. The only way to do this though is by radically democratizing our corporate-dominated political, economic, and food systems, taking them out of the hands of the billionaire class.

Over these next four critical years, Food First is excited to continue working alongside the organizers, workers, farmers, and communities building the type of movements that can bring about systemic change and end the injustices that cause hunger. For any successful food movement, there will be a need for strategy that is rooted in independent, rigorous analysis and political education that reveal the true causes of hunger: unequal power and injustice driven by our economic system. If we get our analysis wrong, then we get our strategy wrong. Those with power have their think tanks; our movements need their own, and that’s why Food First has existed for over 45 years. We hope that you continue to join us in this fight for a better food system and better world.

In October, the US Food Sovereignty Alliance (USFSA)—an alliance that was co-founded by Food First and organizes for the democratic control of our agri-food systems—spoke out against the Trump administration’s hostility towards agroecology and the collective rights of peasants, farmers, and workers in rural areas.

In particular, the USFSA denounced a speech from Kip Tom, the US Ambassador to the UN Food and Agriculture Organization (FAO). In front of a forum at the USDA, the ambassador delivered a speech titled “The Innovation Imperative,” where he disparaged the practice of agroecology and the recent support it has received from UN institutions. In the name of “fighting hunger,” Tom repeated corporate agriculture’s talking points of needing to intensify the very practices and systems responsible for impoverishing millions of farmers around the world. Tom made arguments that farmers must view themselves as businessmen, with the aim of scaling up and expanding in order to produce profits just like any other business. Throughout his speech, he lashed out at institutions and organizations similar to Food First and many of our allies for supporting sustainable, agroecological ways of farming rooted in small holder, peasant practices and knowledge. He cast this peasant and small farmer-led movement for agroecology as unscientific and irrational. But we at Food First, as well as the USFSA, know that this couldn’t be further from the truth.

Kip Tom’s criticisms of peasant farming, as well as his proposed solutions, will only continue the trend of impoverishing millions of small farmers around the world, therefore exacerbating hunger. For decades now, Food First has shown letting markets and profits determine all aspects of farming fails to address hunger, and even perpetuates it. Continuing down the path of intensifying the same old practices that benefit large corporations and only the largest farmers undermines the ability of small farmers to feed themselves and their communities, accelerating environmental degradation and climate change. Kip Tom claims that it is impossible to rely on small farming practices to feed the world and demands that we double food production. But the truth is that we already produce more than enough food for everyone on the planet. According to research, small farmers already produce anywhere between 50% and 70% of the world’s food while using a much smaller proportion of arable land than Big Ag. With government and institutional support, small farmers could thrive. The problem isn’t about innovating new technologies, or “backwards” farming not producing enough food; the problem is how our global food system overproduces food and drives down prices to the point where many farmers can no longer afford to remain on the land, making these very same farmers go hungry. The problem of hunger isn’t a production problem, but a problem of people being too poor to buy food.

Ambassador Tom’s attack on international institutions’ support for alternative, sustainable, and fairer forms of farming is nothing more than an attempt to protect the interests of Big Agribusiness. But as we continue to spiral further into global climate and inequality crises, the movement for agroecology knows that it is imperative to fight back against the false myths and false solutions that will only continue to grow the world’s hungry and degrade the environment. Alternatives to our current, unjust agricultural and food system are not only possible, but entirely necessary for the survival of the planet.

Fighting for robust worker rights, union rights, and living wages is critical to combatting the injustices that drive hunger. That is why Food First supported gig workers fighting for dig nity and security against a $200 million dollar blitz by Silicon Valley to pass Proposition 22 in California. Unfortunately, powerful corporations like Uber, Lyft, DoorDash, Instacart, and others got their way at the ballot box, opening up the door for similar anti-labor legislation to spread across the nation in the years to come, potentially worsening inequality and poverty for many workers. 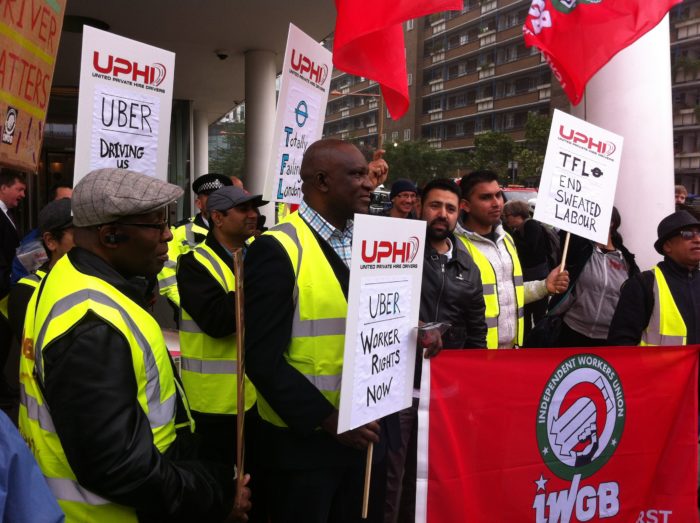 Precarious Workers Strike Back. Photo by War on Want (CC BY).

In Showdown at the Ballot Box: Gig Workers Versus Big Tech, Food First’s Erik Hazard highlighted the importance of the ballot measure and what it might mean for labor organizing and worker rights in the future. Proposition 22, which was supported by large, Silicon Valley corporations with enormous amounts of money, as well as other civic organizations, sought to overturn a major piece of legislation (AB 5) by the California legislature. In that piece of legislation, California ruled that many workers were being misclassified as independent contractors, allowing for companies to exclude their labor force from basic worker rights afforded to people who are classified as employees. Misclassifying workers has been a strategy by companies since the 1980s to undermine unionization, avoid living wages, dodge tax payments, and so much more. California’s legislation also significantly threatened many companies in the “gig economy” like Uber, Lyft, DoorDash, Instacart and other companies, whose entire business models are dependent on misclassifying its workers. Instead of accepting legislation that would require these companies to provide their workforce with basic protections and guarantees, they engaged in a massive misinformation campaign to sway voters to support corporate interests over workers.

But Proposition 22 may go much further than just the gig economy. Now that it is passed, the companies who poured in millions of dollars to weaken labor rights may take this fight to the rest of the country and even at the Federal level. Many more workers outside the gig economy may find themselves stuck in the “independent contractor” category in the future so companies can increase profits by weakening labor’s power. It is going to take some serious organizing between workers who are classified as employees and those labeled as independent contractors, as well as those who are unionized and non-unionized, in order to take back our democracy from corporate power and ensure that working people can live with dignity and not precarity. 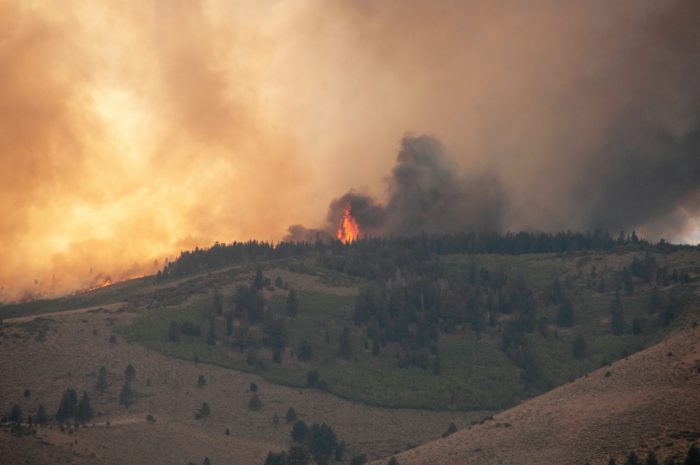 This past summer and fall, farmers and farmworkers in California (and the entire Western US) had to manage two crises—Covid-19 and massive, uncontrollable wildfires. In How Farmers and Farmworkers Are Combatting California Fires, Frankie Wallace highlights the root causes of the wildfires, the importance of protecting water sources from the devastation, and the creative ways farmers are coping in order to continue feeding us. As the article makes clear though, these dangerous conditions for fires will continue until we make much larger changes as a society to move towards cleaner energy. Part of this means taking food and agriculture out of the hands of the corporate food system and placing power into the hands of farmers and farmworkers who will be facing the brunt of climate change in the years to come.

Our capitalist agricultural system of “get big or get out” forces farmers into a dangerous trap of overproducing and constantly expanding in order to survive, putting even more downward pressure on prices. Small and medium farmers, along with the environment, lose. But big retailers and large meat producers who need cheap food to make profits want us to continue this dangerous cycle. But there is a way out for farmers — parity! Check out this terrific video on parity by the National Family Farm Coalition to learn more: https://www.youtube.com/watch?v= TlvelBY75kM

Covid-19 has accelerated and deepened food insecurity in rural areas. But it by no means caused it. For years now, many rural areas have seen deteriorating economic conditions, higher food prices, and limited access to grocery stores and food banks. While rural communities are doing what they can to overcome these obstacles, it is clear that we need structural, political solutions such as parity, unionized jobs, living wages, public investment, and more, to push back hunger in the very places that produce our food.

This Holiday Season, Buy That Special Foodie in Your Life a Food First Book

Have someone in your life who wants to learn more about how our food system works? Perhaps get them a Foodie’s Guide to Capitalism by former Food First Executive Director, Eric Holt-Giménez, and give them a fresh perspective on how capitalism drives our global food system. Everyone who wants to end hunger, who wants to eat good, clean, healthy food, needs to understand capitalism. This book will help do that.

Another great choice is Food First’s Land Justice: Reimagining Land, Food, and the Commons in the United States. While the various strands of the food movement have made enormous strides in calling attention to the many shortcomings and injustices of our food and agricultural system, the movement for fairer, healthier, and more autonomous food is continually blocked by one obstacle: land access. In this anthology, organizers, farmers, and scholars make the case that to move forward to a more equitable, just, sustainable, and sovereign agriculture system, the various strands of the food movement must come together for land justice.