The Monsanto Tribunal: A Report-Back

The Tribunal of Monsanto was held from October 14th to October 16th in The Hague, Netherlands at the headquarters of the International Court of Justice.

For two days, agrochemical victims, experts, and witnesses from around the world shared their experiences with five internationally renowned judges in order to assess Monsanto’s activities, particularly in terms of the right to food, the right to health, the right to a healthy environment, and the right to information.

Corinne Lepage, the former French Minister of the Environment, had the honor of opening the trial by stating the purpose of the Tribunal and its symbolic nature: “Its function isn’t to condemn Monsanto under either criminal or civil law, but instead to state the law and answer questions regarding the compliance or non-compliance of Monsanto’s behavior with the rules of international law.” 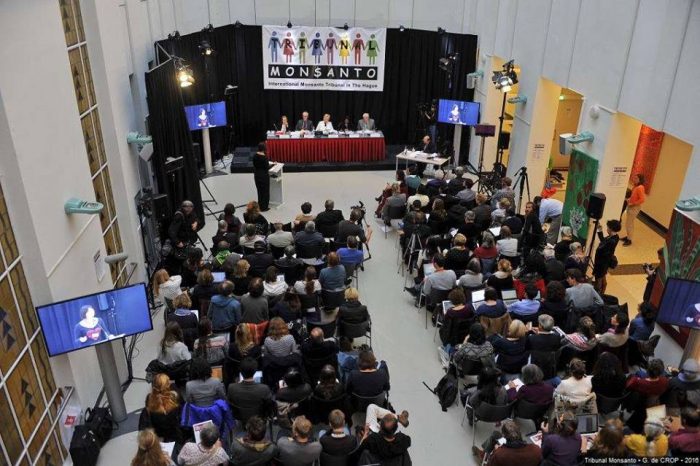 While Monsanto did not attend the tribunal nor bring witnesses (and even wrote a letter in reply to the tribunal claiming its nonsense), the tribunal, by many accounts, was a success. Several hundred participants gathered for the proceedings, including 30 witnesses from Bangladesh, the United States, Colombia, Burkina Faso, and Argentina, to name a few. From transgenic corn in Mexico to transgenic soy in Argentina; from cotton in India to Glyphosate product contaminations worldwide – the tribunal explored a wide range of testimonies and evidence.

Sabine Grataloup was the first witness before tribunal judges. She made a moving speech on behalf of her nine-year-old son, Théo, who is suffering from esophagus and trachea malformations; Sabine used to spray glyphosate products in her backyard during her pregnancy. Theo had been through 50 surgeries since his birth.

Another witness was Paul François, a French farmer who was poisoned by Lasso, one of Monsanto’s herbicides, and won a court case against Monsanto afterwards. He attended the tribunal to give hope to victims that are willing to sue Monsanto, but also to talk about the unbearable pressure that he went through during the legal proceeding because of Monsanto’s threats.

The tribunal also welcomed several legal and scientific experts, including Timothy Litzenburg, an American lawyer who represented Americans that developed non-Hodgkin’s Lymphoma correlated with glyphosate product exposure. He witnessed at Christine Sheppard’s side, a coffee producer with non-Hodgkin’s Lymphoma.[1] Other experts were also present, such as Damian Verzeñassi, an Argentinian socio-environmental health teacher who spoke about the impact of GMOs and Roundup on human health, and the American biologist Don Huber, who demonstrated the impact of Monsanto’s activities on soils and plants. 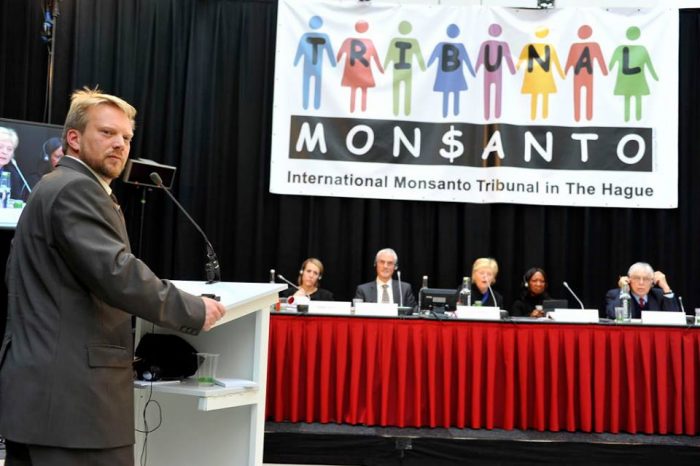 Monsanto’s impact on farmers and the right to food were also represented by several witnesses, including Farida Akher, a spokesperson for the Nayakrishi Andolor farmers’ movement in Bangladesh, who discussed how Monsanto is taking Bangladeshi farmers’ seeds and attempting to impose its GM eggplants without their consent.

The second day, many experts, toxicologists, agronomists, and academic researchers witnessed the pressure that Monsanto is placing on institutions and stakeholders in order to protect its interests. Perhaps one of the most emblematic examples is the case of Claire Robinson, a British editor at GM Watch who talked about Monsanto’s smear campaigns against scientists who cast doubt on the safety of Monsanto’s products, especially about the   study, the study of a French scientist demonstrating the long-term toxicity of the Roundup and which have been censored by Food and Chemical Toxicology in 2013.

What are the benefits and the goals of the tribunal? What can we expect from it?

Through two days of testimonies and debates, the tribunal provided a common space where victims could meet and exchange their experiences. It enabled them to identify themselves with other people who went through a similar situation. “For some victims it was also an opportunity to escape from massive loneliness. When you are a rice farmer in the depths of Sri Lanka, it’s hard to imagine you could ever get to speak in front of real judges,” explained Marie-Monique Robin, the tribunal’s convener pointed out during her concluding speech. Since the tribunal was independent and impartial and was constituted with well-known and experienced judges, it helped to restore trust between civil society and the legal system – a point that was highlighted several times within those two days. 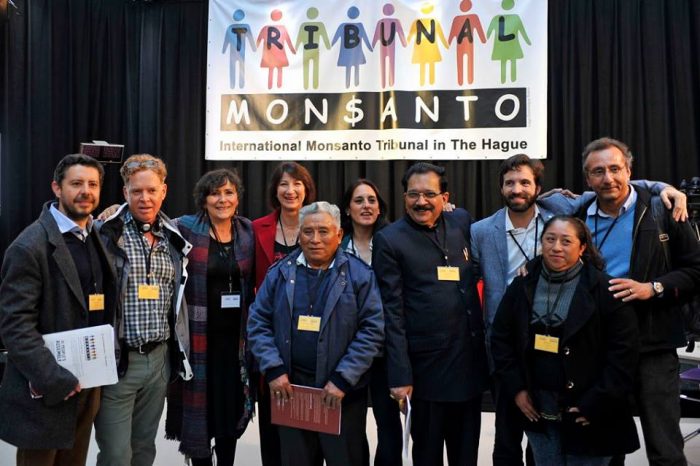 The original objective of the tribunal was to get an “advisory opinion” from the judges, which would give legal tools to the victims, the judges, and the lawyers – ultimately enabling them to pursue corporate liability in the future. Additionally, the tribunal is meant to advance international law towards the recognition of the crime of Ecocide as a fifth crime that would be add to the four crimes already recognized by the international court: the crime against humanity, the crime of genocide, the crime of aggression and the war crime. In her closing speech, the Judge Tulkens, chairwoman of the Tribunal and former vice-President of the European Court of Human Rights, made it clear that throughout the two days, the judges did understand the need to recognize the crime of Ecocide. Nonetheless, she emphasized the role of the civil society in this change: “But it’s up to civil society. The law follows things and events, so it will be thanks to you that the law could change, and thanks to your movements.” Marie-Monique Robin concluded in the same spirit, making a particular point about the role of glyphosate in this issue, “I hope the crime of Ecocide will be recognized and preparing the program of these auditions, it seemed to me obvious that glyphosate, as such, this herbicide, is an instrument of ecocide, because it damages the health of soils, plants, animals and humans. Isn’t it a good definition for Ecocide?”

When will the Advisory Opinion be issued?

The Judge Tulkens’ answer was straightforward: “Neither too early, nor too late.” According to her, an opinion could be issued on December 10th for Human Rights Day, or even in April for Earth Day – she wasn’t able to set a date. One thing is sure, however – the community will be kept informed in order to “keep both the tension and the intention.”

[1] Christine Sheppard is a coffee producer in Hawai that used to spray her fields with Roundup. She was the first farmer to sue Monsanto after being diagnosed with a non-Hodgkin lymphoma; her case was emblematic, linking non-Hodgkin lymphoma glyphosate.